I follow the stories in The Armed Citizen column of the NRA Journals each month. For copyright reasons, the stories have to be re-written. With the more interesting ones, I try to track down the original story to see if there is more detail. A story in the August 2015 issue involves a downrange incident and piqued my interest to find out more about it. The results were interesting. The Armed Citizen entry is as follows:

Breaking up before the big dance carried a price for several people. Two Wisconsin teens had a lovers’ spat before the prom, after the girl’s parents had spent $500 on a dress. The girl’s parents asked the boy to partially reimburse them since he backed out of the date. The Madison boy stewed about the request and became enraged. He returned to his girlfriend’s house in the wee hours of the morning and tried to break in. The girl’s father caught the boy and called him to task, prompting the boy to draw a knife and stab the man seven times. While the two males were grappling, the girl’s mother came out and fired a handgun into the air. The gunfire distracted the youth, and the man wrestled the teen to the ground. The boyfriend faces multiple charges, including attempted homicide. The girl’s father was airlifted to a hospital to have his wounds treated. (Wisconsin State Journal, Madison, Wis., 5/8/15)

One of the first links I found was to the original Wisconsin State Journal article.  It did indeed provide more details, such as how the boy attempted to make entry into the house and the fact that he first of all nailed the father with a shovel. Several other links I found, for instance CBS News, referenced the Associated Press edition of the original article. Somehow, the fact that a handgun had been involved in stopping the incident was left out of the AP edition I found at CBS. At first I thought CBS had edited it but I decided to check. I found other outlets carrying the exact same words from AP, so it was the Associated Press that omitted the handgun detail, not CBS. I’m sure that was unintentional due to brevity requirements or somesuch. Yeah, yeah, brevity requirements, that’s the ticket.

There are several things I find worthy of consideration regarding the event itself. First, incidents where there is a family member or other innocent person in between an Armed Citizen and a criminal attacker are what I call downrange incidents. These are much more common than people like to think. The reason is simple. We’re around our families and friends at lot, typically at least half of each day. But the amount of forethought and practice gunowners tend to give this fact tends to be minimal. Part of that represents the way the indoor range practice environment is set up. It doesn’t lend itself well to practicing for downrange incidents. Unless someone is very confident of their skills, downrange incidents are probably going to be resolved at very close range as Meghan Brown did after a man broke into her home and began fighting with her fiance.

The two rolled around, breaking the dining room table and chairs. Planthaber [the fiance] said it lasted about two minutes. Hill [the invader] had a good 80 pounds on him and was winning.

While they were fighting, Brown got her gun from the bottom drawer of her nightstand.

She trained the weapon [a pink .38-caliber revolver] on the man, but was unable to shoot because Planthaber was too close. [I am willing to bet money she positioned herself as close to them as she possibly could.] She followed his movements.

‘I had my gun drawn, focused in on him; as he moved, my gun moved,’ she said. ‘I waited for my shot, and when I saw an opening, I fired.’

Unfortunately, I don’t have a really good answer about how you practice for this, especially in the indoor range environment. If your range will allow you to place a hostage type target at 1 yard, you could practice single shots starting from a ready position off the target. Many ranges will not permit this though, so ask first. You may have to explain what your objectives are and perhaps allow the staff to supervise you. 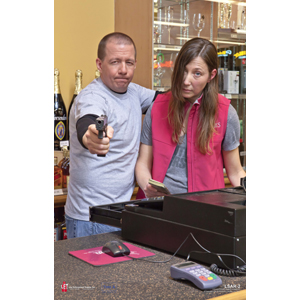 At the very least, some mental preparation and mental rehearsal is in order. DO NOT dryfire practice this with a real gun and real people, even if you think the gun is unloaded. That’s a recipe for a Negative Outcome.

If you have access to an outdoor range, here’s a practice drill you could do. If your situation permits it, you could also try this with Airsoft in your backyard. 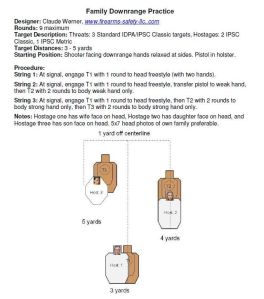 Another aspect worth considering is the possibility that the male of the household will end up in a physical struggle with a criminal attacker and a female member of the household will end up doing the shooting. Both of the above incidents are examples of that dynamic. I have dozens more in my database. Knowledge of how to operate a firearm and having the will to use it will probably work out better than having a stab a man to death with a butcher knife. Note also that wasp spray didn’t have any effect in this incident.

At some point, ‘the husband was having trouble controlling the suspect and called out to his wife,’ [the Sheriff’s Office spokesperson] said. That’s when the woman ran to the kitchen and retrieved a [butcher] knife, fatally stabbing [the attacking criminal].

For those couples who are serious about personal protection, thinking about it ahead of time may pay off. This is an article I wrote about Protecting Your Family: Training for Mutual Defense.

Why a Practice Program and not a training program?
I created the Pistol Practice Program (PPP) to fill a need for many gunowners. Most gunowners are self-taught and generally are not familiar with a structured approach to skill development. There is a great deal of information available now on how to shoot a pistol. However, there is much less information available on how to practice firearms skills over a period of time to achieve greater confidence and proficiency. As Aristotle said:

We are what we repeatedly do. Excellence, then, is not an act, but a habit.

My goal was to create a program that would get gunowners into the habit of shooting well. I created a step by step approach tailored to the needs of the casual shooter but challenging enough to satisfy the enthusiast. Designed as a series of range sessions, you can practice at your own pace as your schedule permits.

In the case of those who have attended training, your instructor probably said that a firearms class only provides a foundation of skills. To maintain those skills and improve, people who own pistols need to practice after training. Having a program also makes shooting more fun because the shooter develops a sense of accomplishment from the practice. This program is not concerned with what particular technique the shooter uses. Over time and by working the PPP, shooters will determine what works best for them.

The vast majority of gunowners only have access to indoor or public ranges where the type of practice they can do is rather restricted. The PPP takes that constraint into account and presents drills that are indoor range friendly and yet relevant to skill development. The livefire range sessions are then supplemented by dryfire sessions that can be done safely at home. Doing so allows you to develop skills that usually cannot be practiced at an indoor range. How to practice at home safely is thoroughly explained.

The PPP is available on CD. Its contents are mobile device friendly so you can copy the drills to your smartphone or tablet. If your device can access a PDF reader, you can easily take the exact drills to the range with you without having to lug along a book or write down the contents of a DVD. You can also put the dryfire audio sessions on your device for maximum convenience.

Those who are teaching a friend or loved one how to shoot a pistol will find the PPP provides a solid structure for their time at the range. For those who have attended a training class, the PPP provides a way to maintain and build the skills they learned in class. Law enforcement officers can use the PPP to keep your shooting skills tuned up in between qualifications and make qualifications less stressful. Put whatever practice ammo you receive from the department to good use instead of frustrating yourself by shooting the qual course over and over.

Contents of the PPP

I have drawn on a wide range of training experience, from teaching NRA Basic Pistol classes to my time as the Chief Instructor of the elite Rogers Shooting School, to create this Program. There is no doubt in my mind that shooters at all levels of skill and experience can benefit from it.

The PPP CD is available on my webstore.  At $19.95, it’s about the cost of one box of centerfire ammo. Bonus: the first 100 orders will receive a Rogers Tap-Rack-Training aid, a $5.00 value, at no charge.