The Los Angeles Times recently published an Op-ed piece entitled Why the police shouldn’t use Glocks.  I find it shortsighted and the author’s reasoning incomplete and faulty.

Although I prefer a Double Action Only or Double Action/Single Action gun for my personal use, I perceive several issues with the article.

The half-inch difference of trigger travel may not sound like much, but it can be the difference between life and death.

The statement is a core issue. There’s no control statement about how many successful uses can be attributed to the GLOCK’s shorter trigger. The first shot is both the most important and, with DA guns, the most often missed. Aside from the possibility of ending the fight sooner, the issue of errant rounds flying around the community is also disturbing. 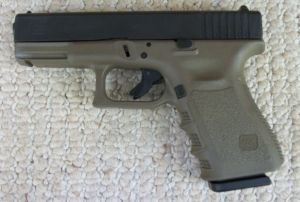 A number of major and minor agencies use guns with much longer double-action triggers that are just as easy to fire deliberately but that are much harder to fire accidentally.

That’s a well couched statement. If we substitute the term ‘hit with’ for ‘fire,’ it completely falls apart. Making the gun go off is just part of the equation; hitting the intended target is equally important.

Much as I like them, double-action triggers are NOT just as easy to hit with deliberately as a Glock’s. If we include shooting in reaction time, vis–à–vis deliberately, the equation shifts even more in the Glock’s favor. For smaller statured officers, it’s sometimes nearly impossible to grip and shoot a double action gun well. Having taught numerous smaller military personnel to use the M9 pistol, I can say unequivocally that grip size and trigger reach can be a major problem.

Granted, many officers can learn to shoot a double action gun reasonably well with plenty of training and regular practice. However, that’s not the reality of police administration, either from the hiring or the budgetary perspectives.

What critics should be addressing instead is the brutal reality that short trigger pulls and natural human reflexes are a deadly combination.

In a shootout with a criminal, that’s exactly the point that the author seems to miss. A well-placed source provided some insight to me about the FBI’s decision to issue Glocks years ago, after resisting them for years. “The New Agents could shoot them so much better than the Sigs it was striking.” This from the law enforcement agency with perhaps the most extensive firearms training program in the world.

All equipment has issues associated with it. The accidents cited in the article are tragic and regrettable. However, arguments similar to the author’s could be made for putting speed governors on police vehicles because police officers sometimes get into crashes, with resulting casualties, during pursuits or requests for service. I don’t see any call for that. If avoiding unintentional casualties is the main issue and only criterion, why not just go back to revolvers?

The author didn’t make much of a case for his opinion other than citing a few Negative Outcomes. Without providing the other facets of the decision making process and then weighting the various aspects, it’s a weak argument. The selection of a firearm, whether for police service or individual use, is a complex one. The ability to use it safely is key. However, the ability to use it effectively is just as important.