One of the most important personal protection skills we can develop is to set boundaries and clearly communicate them. Simply saying NO! in a firm voice is the most concise method of doing it.

Although the comment has been made that I give my clients permission to be rude, that has evolved in my mind to simply giving permission to say NO! As a society, we have placed so much emphasis on consensus and negotiation that our ability to firmly set boundaries and communicate them has become sadly neglected.

When someone refuses to respect a boundary that you have set very clearly, their intent becomes immediately clear. That clarity allows us to make definitive decisions about our own course of action.

Practice saying NO! every day in your normal daily activities. You don’t have to be mean or discourteous about it, simply say it firmly and with conviction. Often, when you say it, the other party will physically react and rock back on their heels. You have utterly reset their OODA Loop at that point.

The Spirit of the Bayonet

“The will to meet and destroy the enemy in hand-to-hand combat is the spirit of the bayonet. It springs from the fighter’s confidence, courage, and grim determination, and is the result of vigorous training. Through training, the fighting instinct of the individual soldier is developed to the highest point. The will to use the bayonet first appears in the trainee when he begins to handle it with facility, and increases as his confidence grows. The full development of his physical prowess and complete confidence in his weapon culminates in the final expression of the spirit of the bayonet — fierce and relentless destruction of the enemy.”

Note the subtle distinction between the ‘spirit’ of the bayonet, “The will to meet and destroy the enemy in hand-to-hand combat” and the ‘final expression’ of the spirit of the bayonet, “fierce and relentless destruction of the enemy.” The first is philosophical, the second operational.

Recognizing how to put a concept into operation is an important step in turning information into knowledge. For instance, how can we operationalize the “O-O-D-A Loop?” My colleague Melody Lauer once asked me:

How do I use the OODA Loop? That’s not clear to me.

At the time, I didn’t have a good answer for her.

Now, I would say that the basis for making Boyd’s process operational is to dig deep into Orient. Boyd himself said:

“I’ll shoot anyone I find in my house” is an example of an input to Orientation, probably a Cultural Heritage artifact from English common law of centuries ago. When we acquire New Information through training, observation, or experience, that also becomes an input to our Orientation. Then comes the hard part, Analysis / Synthesis. All the other inputs to Orientation coalesce through Analysis / Synthesis into decision-making that occurs ahead of an incident rather than during the incident. We may need to modify the plan and decisions as an incident unfolds, but that’s much easier and faster to do than making a plan up on the spot.

Examining, expanding, and integrating all of our Orientation inputs is what allows us to ‘make’ good decisions quickly. When we have formed a solid Orientation, we are actually not making decisions in the moment, rather we are ‘choosing’ from a menu of pre-made decisions available to us because we’ve already considered the benefits, objectives, and consequences and made a rational decision about what’s in our best interests. It’s how we avoid making Serious Mistakes. http://seriousgunownermistakes.com/

My thanks to Melody and Joseph Edward Timbs for provoking me to write this post. Also thanks to Steve Moses, Shawn Vincent, and Don West of CCWSafe for inviting me to participate in a thought provoking podcast about the topic.

We’ll get through this

The Assassin and I had White Pizza at Mellow Mushroom in Mayretta for lunch. It was good. The place wasn’t crowded with small disease vectors, i.e., children, which made our visit even more pleasant. A couple was sitting at the bar having drinks and a quiet conversation and a few other people were ordering calzones.

He and I talked about Personal Protection stuff, as we usually do. I showed him a new target I’ve designed and a Baseline Evaluation and Monitoring Course of Fire for new shooters I’m developing. Then I asked his input about the overlap and intersection between Steve Harris’ CAN/MAY/SHOULD/MUST paradigm, Ayoob’s Priorities of Survival; Mindset, Tactics, Skill, and Equipment, and my Making Good Decisions model. 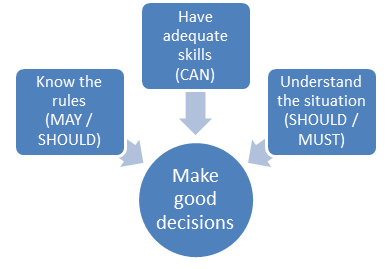 After buying a new pair of jeans, I brought some pizza home for further feasting. Since I’m recovering from open double hernia surgery and was hurting a little, I took a couple of Tynols and then a nap.

When I got up, I decided to have a little more pizza. I don’t ordinarily drink beer but I like beer with pizza, so I broke out a Blue Moon. It was a very nice evening so I decided to finish my beer on the deck. Thanks to Daylight Savings Time, I was able to watch the sun dip below the treeline, which was pretty. The clouds were moving slowly, so I enjoyed watching them for a while. I also savored the sights and sounds of normalcy in the neighborhood. People were taking their walks, a neighbor was chipping some tree limbs he had cut down, a few cars drove by, and quite a few birds were chirping. As I sat there, I contemplated Werner’s Pentagon of Performance, particularly the ‘Stifle Yourself’ corner. 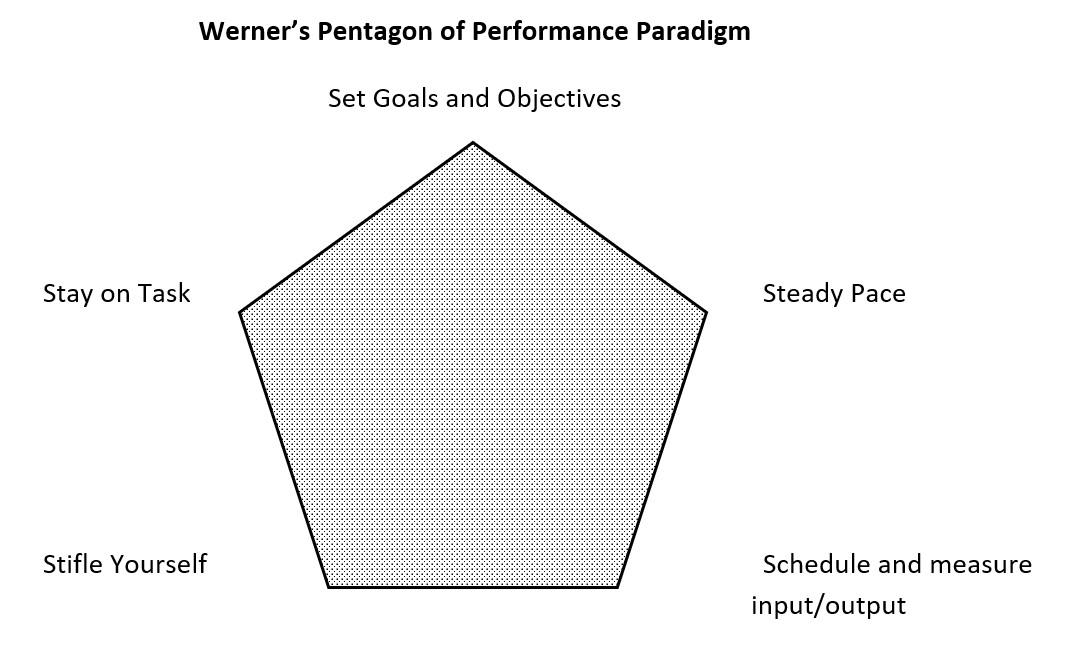 Then I came inside, fed the dogs, and let them out to run around for a bit. After they had finished their business, I let them back in and gave them each a small dog biscuit.

Since I hadn’t quite finished up my latest Patreon https://www.patreon.com/TacticalProfessor article, The Forgotten Teachings of John Boyd, I decided to knock that out and post it. It’s my second article this week about Boyd’s work, the first being A Tale of Two OODAs. Boyd’s scholarship is so superficially understood that I periodically have to address aspects of it. I decided to spend this month doing that since I have several weeks of convalescence ahead. 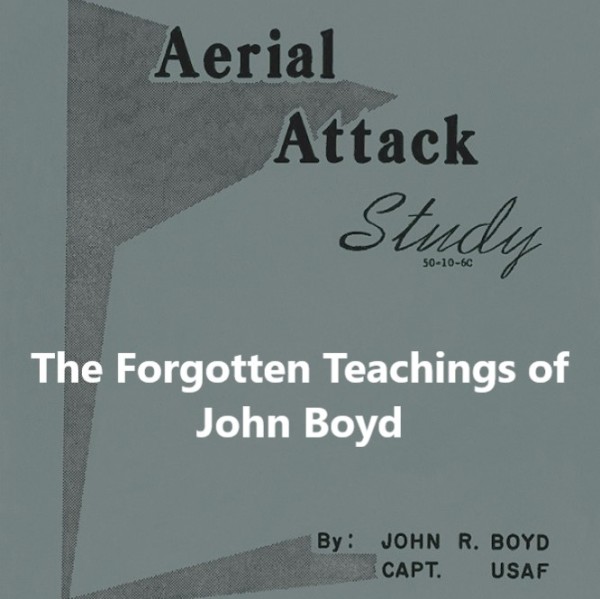 Being very averse to chaos and drama, I decided to write a short post here about my nice quiet day. Something other than the CV drivel that seems to be pervading every aspect of our lives right now might be pleasant for my subscribers and friends.

We’ll get through this. We live in the United States of America, the most wonderful place in the world and the best place that has ever existed on the Planet Earth. I give thanks every single day that I am so fortunate as to live here.

I have a question …

A friend sent me an email today that I think is very worthy of sharing. He is a twice retired POlice Officer, graduate of the elite Rogers Shooting School, and very seasoned firearms and tactics trainer.

What is your overall opinion of competition preparing you for a real gunfight?

I published my response on my Patreon page, which is generally limited to my subscribers there. It’s an important topic so I decided to make it publicly available. https://www.patreon.com/posts/33975252

By tacticalprofessor on January 2, 2020

The link for the updated version of the AAS changed slightly but is now correct.

Boyd’s Aerial Attack Study is the most useful of all his documents in terms of tactical theory. Hardly anyone has read it, though.

Thanks to Rob Pincus, I have found a cleaner copy of Colonel John Boyd’s Aerial Attack Study (AAS). It was recreated by Mr. Mark Hart from the declassified 1964 version. The recreation is much easier on the eyes than the reproductions of the original mimeographed edition that are generally available.

Prior to Colonel Boyd’s AAS, fighter combat was viewed by the majority of fighter pilots as an intuitive skill rather than one that could be codified. Some conceptual principles had been developed along with elementary tactics such as the Thach Weave, but Boyd was the one who wrote the definitive book. Only Major General Frederick “Boots” Blesse had preceded Colonel Boyd in writing a book, No Guts No Glory, about jet fighter combat. Major General Blesse’s book wasn’t the exhaustive treatise on the subject that the AAS was.

Why do people carry an autoloader with an empty chamber? Because they’re concerned about having an Unintentional Discharge.

One of the comments about the incident on Facebook sums up many people’s feelings about it.

Which is more likely to save your life? Carrying an autoloader with the chamber empty or carrying a revolver ready to go? Active Self Protection provides us with some food for thought.

A Stark Reminder to Keep Your Defensive Firearm Chambered

Another Reminder to Carry Chamber Full

END_OF_DOCUMENT_TOKEN_TO_BE_REPLACED

I was the guest on another podcast last night. Knowing that many people like to listen to podcasts, I compiled a list of the podcasts and topics that the hosts have been so kind to invite me to join.

Ballistic Radio – The Boyd Part About The OODA Loop, February 7, 2016

Ballistic Radio – Gunfight Analysis, Understanding the Threat YOU Are Most Likely To Face, April 20, 2014

Thanks to Rob Pincus, I have found a cleaner copy of Colonel John Boyd’s Aerial Attack Study (AAS). It was recreated by Mr. Mark Hart from the declassified 1964 version. The recreation is much easier on the eyes than the reproductions of the original mimeographed edition that are generally available.

Prior to Colonel Boyd’s AAS, fighter combat was viewed by the majority of fighter pilots as an intuitive skill rather than one that could be codified. Some conceptual principles had been developed along with elementary tactics such as the Thach Weave, but Boyd was the one who wrote the definitive book. Only Major General Frederick “Boots” Blesse had preceded Colonel Boyd in writing a book, No Guts No Glory, about jet fighter combat. Major General Blesse’s book wasn’t the exhaustive treatise on the subject that the AAS was.

END_OF_DOCUMENT_TOKEN_TO_BE_REPLACED

Another visit to John Boyd and OODA

A friend of mine shared a memory of this article on Facebook. I’m glad that he did.

Putting Orient Back into OODA

I’ve evolved my thinking about Orient to include more nuance but the article is still a good primer on the depth of Boyd’s concept and how we can and should apply it. 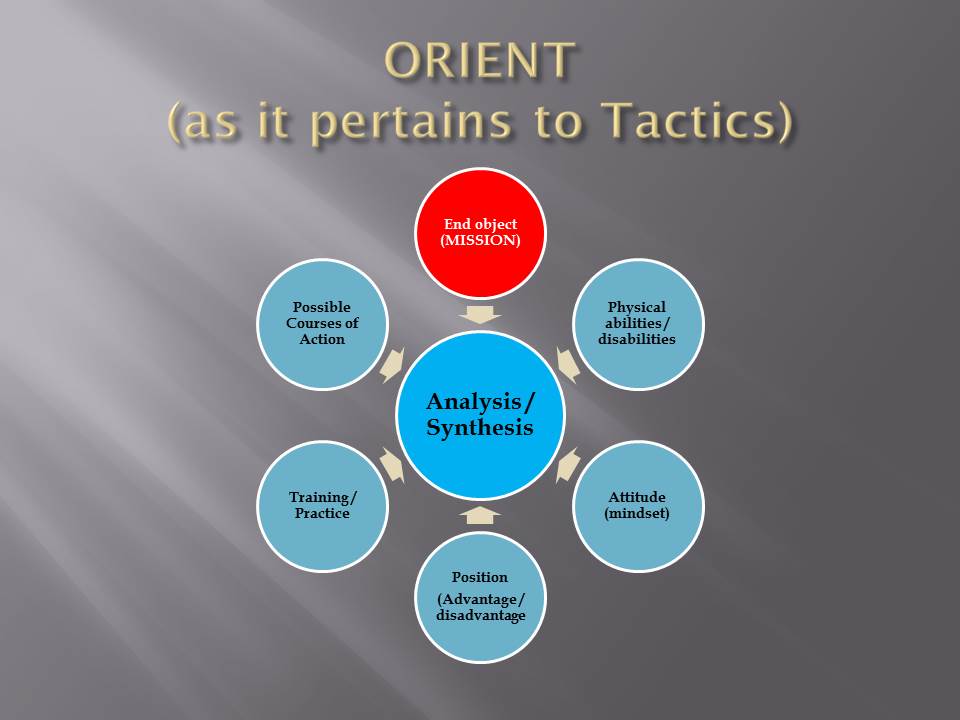 And please keep in mind that it does a disservice to Colonel Boyd’s ideas when they are reduced to a simplistic four point circular diagram. 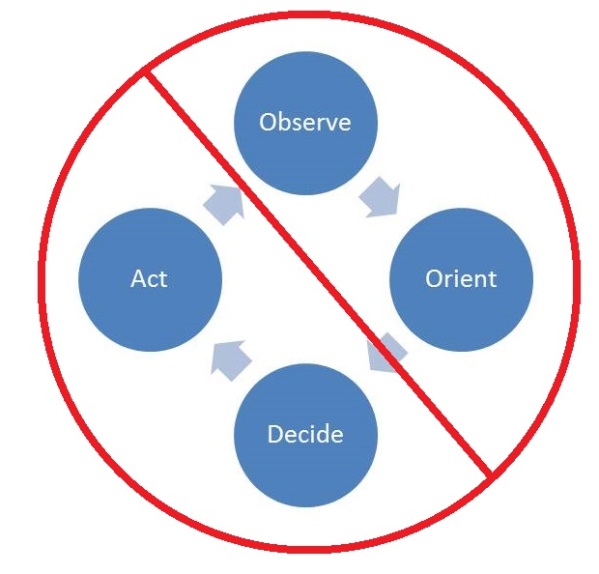 The OODA Loop and Negative Outcomes – Part I

Whoever meddles in a quarrel not his own is like one who takes a passing dog by the ears.

“In rejecting the Lansdale man’s appeal, a judge wrote Storms thinks he is ‘some type of hero that injects himself into certain situations.’ ”

Our Decisions usually determine our Outcomes as I’ve mentioned in a previous post. Many, if not most, of our decisions are made ahead of time. When we make the same decision repeatedly over time, that is obviously the case. If we have made bad decisions ahead of time, the likelihood we WON’T select that decision from our list of options is minuscule.