Gun Training from Friends and Relatives

This is a good example of why “My uncle is a veteran and he taught me to shoot” isn’t the hot ticket.

Watching the video in slow motion and looking at the track of the hits, it’s fairly clear that every hit on the roof and back of his car was created by the homeowner. Negative Outcome. There’s a hit on the side glass that probably came from the criminals and started it all.

This story was sent to me by a friend from the original tip on Gun Free Zone https://gunfreezone.net/thats-a-lot-of-dumb-luck-and-spent-brass/. I agree with this commentary.

He is very lucky to have survived and to have not been charged with a crime for filling a neighborhood with bullets.

Suppressive fire has its place in a combat zone but not in your own neighborhood.

Chasing a criminal after they have attempted to break contact is not the way to set yourself up for success. Shooting the criminal at the conclusion of the chase is a good way to end up in prison. It’s common enough to be one of the 11 categories of Negative Outcomes in Serious Mistakes Gunowners Make. https://store.payloadz.com/details/2617872-ebooks-true-crime-serious-mistakes-gunowners-make.html

A Miami man who allegedly chased an unarmed burglar and shot him several times as he begged for his life is facing an attempted murder charge.

Prior planning prevents poor performance. If you have a firearm for Personal Protection, don’t just think about the incident, plan for the aftermath.

Many basic aspects of rifle marksmanship are a completely mystery to new gun owners and often long time owners. While not all the information in FM 3.22-9 is applicable to civilians, there’s a lot that’s worthwhile. If nothing else, read the sections about Trajectory (exterior ballistics) and Zeroing Procedures. People who have only worked with handguns and not rifles probably don’t have any notion of how important those things are when shooting a rifle. The truth is that many soldiers and veterans don’t understand them either.

There are a bewildering array of handguns and techniques out there. A decent reference is:

Since these are FREE, at least for now, there’s no excuse for not upping your knowledge about your weapon and how to use it.

You might even be interested in putting your new found knowledge to use by shooting the drills in my books. They’re written specifically to take you from the theoretical to the practical.

Conducting a Defense – Terrain Analysis for the Homeowner

The AR-15 rifle has become popular as a tool for Home Defense. However, there hasn’t been much discussion about how to use rifles to deal with deadly threats outside and yet threatening one’s home. The escalation of Civil Disorder has heightened our awareness of a broader range of necessary home defense. Conceptually, this might be considered FORWARD Home Defense.

One of the first aspects of preparing for such a Forward Defense is to conduct a terrain analysis of the area outside the home. This analysis should consider both the Area of Influence (where a homeowner could actually disrupt an attack) and the Area of Interest (where a homeowner could detect an attacker’s intent outside of the Area of Influence.) We can use the Terrain component of METT-TC as a structure for our terrain analysis. The 1992 edition of Field Manual 7-8 INFANTRY RIFLE PLATOON AND SQUAD https://www13.shu.edu/offices/rotc/upload/FM-7-8.pdf describes the analysis as follows:

(3) Terrain. The leader considers the effect of terrain and weather on enemy and friendly forces using the guidelines below (OCOKA):

(a) Observation and fields of fire. The leader considers ground that allows him observation of the enemy throughout his area of operation. He considers fields of fire in terms of the characteristics of the weapons available to him; for example, maximum effective range, the requirement for grazing fire, and the arming range and time of flight for antiarmor weapons.

(b) Cover and concealment. The leader looks for terrain that will protect him from direct and indirect fires (cover) and from aerial and ground observation (concealment). (Author’s note: Cover and Concealment also applies to what the Enemy might use.)

(c) Obstacles. In the attack, the leader considers the effect of restrictive terrain on his ability to maneuver. In the defense, he considers how he will tie in his obstacles to the terrain to disrupt, turn, fix, or block an enemy force and protect his own forces from enemy assault.

(d) Key terrain. Key terrain is any locality or area whose seizure or retention affords a marked advantage to either combatant. The leader considers key terrain in his selection of objectives, support positions, and routes in the offense, and on the positioning of his unit in the defense.

(f) Weather. In considering the effects of weather, the leader is most interested in visibility and trafficability.

Some aspects of the terrain analysis may surprise you. For instance, Google Maps can be used to measure distances around your home. You might find that the distance from your front porch to the furthest Avenue of Approach and Point of Likely Cover is 236 feet (79 yards).

Doing a terrain analysis gives you an idea of the area you need to defend and also what tools you might use to defend the approaches to your home.

There will be further explanation on my Patreon page https://www.patreon.com/TacticalProfessor but this is worthwhile food for thought to start.

By tacticalprofessor on September 10, 2019

The Tactical Wire did a nice writeup about my books, Shooting Your Black Rifle and Serious Mistakes Gunowners Make.

Sometimes it’s hard to describe one’s own work, so I appreciate the Editor’s synopsis of my books.

There was a question this weekend at the Hemorhage Arrest Course about how to convert the PDF books for reading on a Kindle. It’s not hard.

You can send a PDF document to your Kindle or Kindle app on your SmartPhone. PDFs can be converted to the Kindle format so you can take advantage of functionality such as variable font size, annotations, and Whispersync. To have a document converted to Kindle format (.azw), the subject line should be “convert” when e-mailing a personal document to your Send-to-Kindle address. Instructions for sending documents to Kindle and Kindle apps are available on Amazon’s website. https://www.amazon.com/gp/sendtokindle/email

How to send a document to your Kindle:

To find your Send-to-Kindle e-mail address, visit the Manage your Devices page at Manage Your Kindle.

To send a document to your Kindle device or app, simply attach it to an e-mail addressed to your Send-to-Kindle e-mail.

It is not necessary to include a subject in the email.

By tacticalprofessor on August 2, 2019

The Bill of Rights

A well regulated militia, being necessary to the security of a free state, the right of the people to keep and bear arms, shall not be infringed.

There continues to be controversy about the meaning of the Second Amendment. Advocates of Gun Control maintain that it only refers to the National Guard. On occasion, even firearms owners will say that regulated means ‘trained.’ 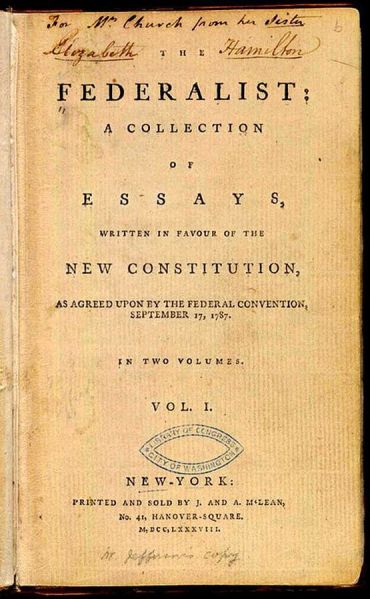 The Federalist Papers (#29 by Alexander Hamilton) gives this interpretation of a ‘well regulated militia.’

“Little more can reasonably be aimed at, with respect to the people at large, than to have them properly armed and equipped; [emphasis mine] and in order to see that this be not neglected, it will be necessary to assemble them once or twice in the course of a year.”

I.e., everyone should own an assault rifle, a basic load of ammunition and be required to show up for an inspection thereof at least annually.

Hamilton alludes to the difficulty of having the entire citizenry participate in military maneuvers sufficient to develop proficiency at a unit level. Any soldier who has been on a Field Training Exercise (FTX) can understand this. But having military weapons in the hands of the People seems to be a viable solution to him. Maintaining individual proficiency with those weapons isn’t something he speaks about.

James Madison wrote in Federalist No. 46:

“Besides the advantage of being armed, which the Americans possess over the people of almost every other nation … Notwithstanding the military establishments in the several kingdoms of Europe, which are carried as far as the public resources will bear, the governments are afraid to trust the people with arms.”

Yet another reference to the value of citizens owning arms.

Madison also makes reference to “that the traitors [emphasis mine] should, throughout this period, uniformly and systematically pursue some fixed plan for the extension of the military establishment.” In a time when a member of Congress talks about using nuclear weapons against the American people, it’s even more important that the people at large possess military weapons.

Professor Eugene Volokh of the UCLA Law School provides some References to the Militia in The Federalist.

The Second Amendment has never been about hunting. That has always been a fiction. The intent of the Founding Fathers was for the people to able to resist a tyrannical central government. 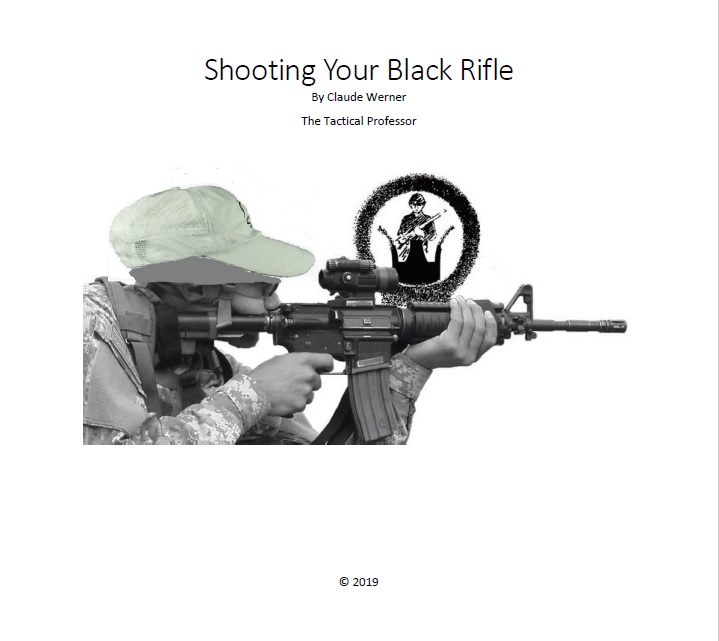 Shooting Your Black Rifle – The Book 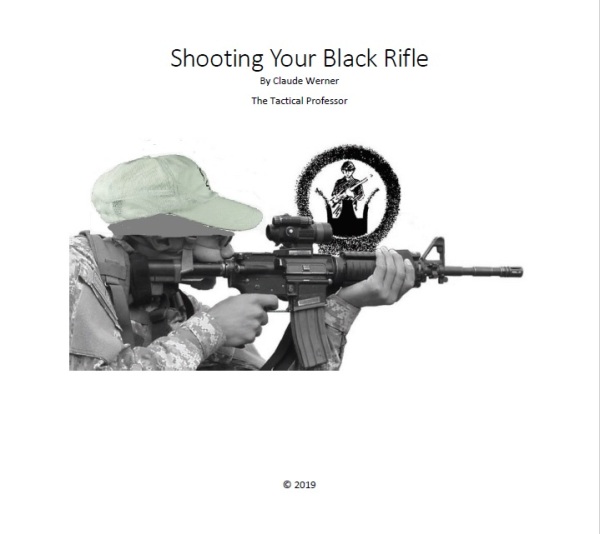 There are many books about how to shoot rifles in general, and Black Rifles in particular. This book focuses on applying the principles and techniques of those books to live fire and dry practice. The book contains numerous Courses of Fire applicable to training and practicing for Personal Protection, along with other useful information for Black Rifle owners. These Courses are drawn from POlice Patrol Rifle courses that involve shooting at 50 yards or less, so they are highly applicable to the needs of the Armed Private Citizen.

This book should be thought of as a guide for practicing the techniques that owners of AR-15s and other Black Rifles have learned or are interested in. Understanding a technique without repetitively practicing it will not yield particularly good results. The Courses of Fire provide a method for practicing what an owner has learned and evaluating what techniques work best for each individual.

Recognizing that many people do not have access to a readily available source of targets, Printable Targets that can be produced on any printer are included. Because many gunowners do not have access to a 50 yard range, reduced scale targets are included. These reduced scale targets can be used on ranges that are only 25 yards long to simulate longer distances.

This is an excellent guide for both new AR-15 owners and those who have owned one for a while but would like to practice with the rifle more effectively. For those who have taken a class about the AR-15, the book provides you with various shooting drills to help you maintain and sharpen the skills you learned. For those who have little or no training, the book gives you a structured way of learning and improving your skills.

It is available in downloadable format. The cost is only $7.99 and I think you will find it is well worth it.

By tacticalprofessor on April 8, 2018

I like to keep track of what my audience appreciates. This was published over a year and half ago. It is the most popular post I’ve ever published, by an order of magnitude. To this day, it gets more views on a daily basis than most of my other posts.