Circumstances of a murder

By tacticalprofessor on August 8, 2018

In lieu of #wheelgunwednesday, an interesting and sad case study came up on Facebook. It is a personal experience and something I have never forgotten.

While I was still living in Chicargo, I often took public transit, especially the Elevated trains. One Sunday morning, I was going to play a softball game. However, the POlice had closed the Elevated station. A woman had been raped and murdered and a would-be rescuer stabbed within an inch of his life at 10AM on an otherwise beautiful Sunday morning on the platform.

A rare second cup of coffee kept me out of that situation. I never have a second cup. To this day, I still wonder if I could have done a hip throw (a Hand to Gland Combat technique) on the criminal onto the third rail. Or maybe I would have ended up like the would be rescuer. He was a runner; the paper said if he hadn’t been in such great shape he would have died too.

My Guardian Angel was looking out for me, as is often the case.

The circumstances of the incident were as follows:

The ridership of the Blue Line Elevated on Sunday mornings at that time was quite light. It was not unusual for me to be the only passenger in the train car. The Blue line runs along the Eisenhower Expressway. Consequently, it is somewhat secluded from observation by the surrounding neighborhoods, unlike most Elevated trains in Chicargo. Further, at least at that time, the station was unattended on the weekends; the train conductor would come and collect fares from passengers who boarded from unattended stations.

Issue Number 1, there is no one around.

The station also has two entrances, one on Austin Avenue and one on Lombard Avenue.

The Lombard entrance is what is called an ‘Auxiliary Entrance,’ i.e., it is only manned during the morning Rush Hour. At all other times, it was Exit Only with full height exit turnstile.

Issue Number 3, even if someone on that side saw a problem, they would have to go FOUR BLOCKS (half a mile on Chicargo’s grid system), all the way to the Austin Avenue entrance and then back the full length of the platform, to help.

Issue Number 4, getting through a full height rotating turnstile is not the same as getting out of an open entrance. 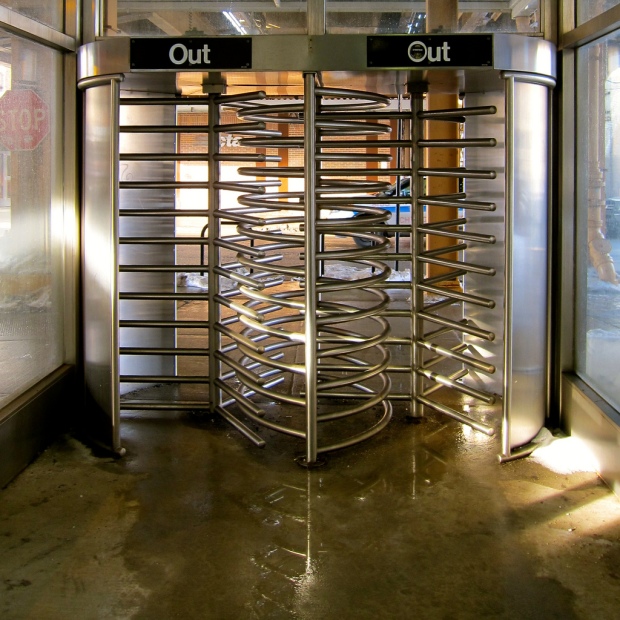 Because the train platform is quite a bit below street level, there are long ramps from the street to the platform. The ramps are about 100 yards long.

Issue Number 5, doing the 100 yard dash up a long inclined ramp quickly is not that easy, especially if you’re not wearing good shoes or you’re not in good shape.

The entrance pictures give a good view of how far below street level the platform is.

The woman had exited a westbound train and proceeded to walk toward the Lombard Avenue exit. The trains typically stop relatively close to the Austin entrance. Because of this, a westbound train pulls ahead of the discharged passengers quickly and is on its way.

Whether the criminal followed her off the train or was waiting in ambush at the Lombard exit is unknown. To my knowledge, the crime was never even cleared, much less solved, as is typically the case with murders in Chicargo. Somewhere around the top of the ramp, but before reaching the exit turnstile, the woman was attacked by a man with a knife.

The sequence of events is not clear, but the newspaper reports said she had been raped and then stabbed and murdered. Whether robbery was involved was never reported.

As the attack was occurring, a man was running along Garfield Street and saw the crime in progress. He ran to help the woman but because of the layout, he had to run the half mile to get to her. Even for someone who can run fast, that takes several minutes. A lot can happen in several minutes, once an attack begins.

He may have been able to reach them while the attack was occurring. More likely, he arrived when it was over, she had been mortally wounded, and then he became involved in a struggle with the perpetrator. During that struggle, he was stabbed several times. He nearly died as a result. The newspapers reported that only his excellent physical condition prevented him from expiring. A friend commented that she had seen numerous articles about trauma survival rates as a function of cardiovascular condition.

As I arrived, two Chicargo POlice officers stopped me on the ramp coming from the Austin entrance. They said the station was a crime scene and I wouldn’t be able to enter. I had to take the bus to my game.

An important thing for us to remember is that Situational Awareness is of limited value once we have been canalized.

—Joint Publication 3-15 Barriers, Obstacles, and Mine Warfare for Joint Operations

At that point, the military term is “decisively engaged,” meaning we have lost our ability to maneuver and must fight it out.

In land and naval warfare, an engagement in which a unit is considered fully committed and cannot maneuver or extricate itself. In the absence of outside assistance, the action must be fought to a conclusion and either won or lost with the forces at hand.

Without weapons and/or fighting skills, luck and hope are the only things that will carry the day. Those are not the kind of odds Las Vegas will make book on.

The factors that led to the decisive engagement which, in this case, was lost, were:

As a result, lives were changed forever, mine included.

Icons courtesy of The Noun Project