A recent discussion about a man unintentionally shooting his stepson https://www.panews.com/2018/08/14/man-accidentally-shoots-stepson-12-after-meteor-watching/ got me to wondering “How fast is too fast?” A little research was in order, so I did two experiments. One was a decisional drill that’s an evolution of the Thinking Drills in my Concealed Carry Skills and Drills ebook. The other was a comparison of the times between Cooper’s original Five Count drawstroke and the Four Count drawstroke it has evolved into.

The Red Black Double Target Decision Drill uses playing cards as a decisional tool. One target is marked red and the other marked black. Both have a high center hit area as well as a head hit area.

The shooter’s back is to the targets with a deck of playing card in front. Turn a card over; if the card is a number card, turn to targets, draw to Low Ready (tennis ball between targets), and then engage the target of the appropriate color. If the card is a face card (Jack, Queen, or King), fire a head shot. The Joker is a no-shoot, in which the turn and draw is done but no shot is fired. 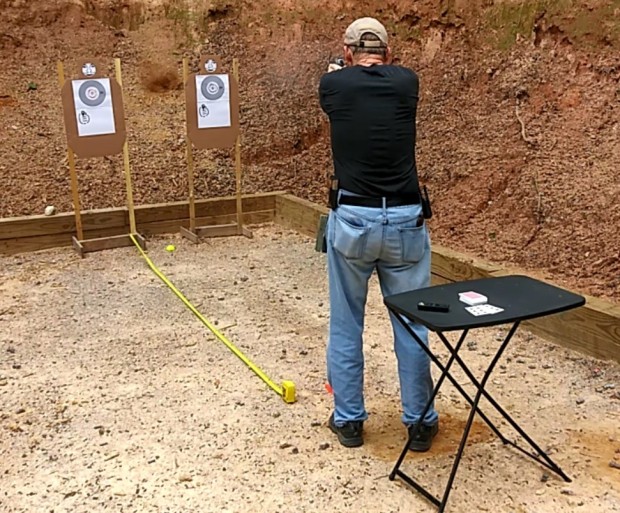 Shooting the drill requires the shooter’s brain to be engaged in more than just holding and triggering the pistol. What the target is has to be remembered and then correctly engaged. Simultaneously, the physical skills have to be brought into play to execute the mental decision process.

“How fast is too fast?” is shamelessly paraphrased from Dennis Tueller’s article “How Close is Too Close?” http://www.theppsc.org/Staff_Views/Tueller/How.Close.htm and an update in the Armed Citizens Legal Defense Network Journal https://www.armedcitizensnetwork.org/the-tueller-drill-revisited

However, the original Five Count originated by Jeff Cooper was somewhat different. My late colleague Paul Gomez explains it in this video.

The Counts were the same but their meaning had some difference.

To test the time difference between the Five and Four Count methods, I set up an experiment using two targets and a J Frame revolver.

One target had a tennis ball at the base, which would be the point drawn to on the Smack Count followed by a presentation to the target and a shot fired. The other target was drawn straight to and a shot fired. Five draws were done for each. The results were as follows:

Since the Five Count drawstroke is not what I usually do, let’s examine the Best 3 of each. 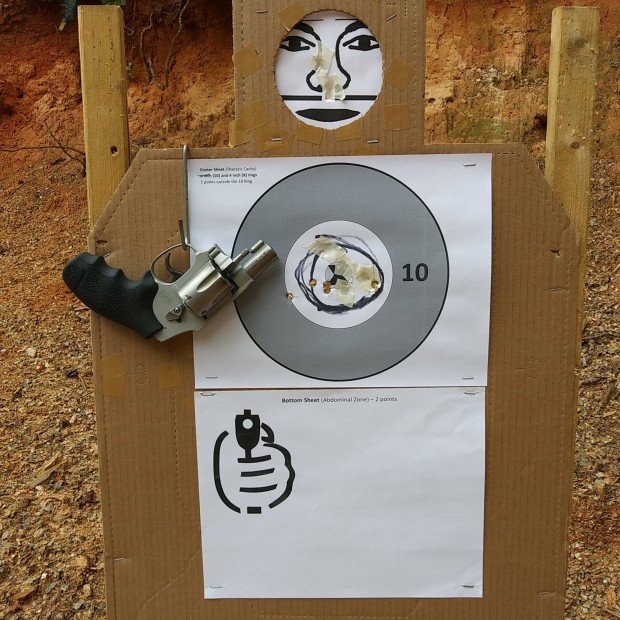 How important is ½ second in the context of NOT shooting someone you shouldn’t? Since the vast majority of DGUs don’t involve gunfire but rather the readiness or display of a gun, I think that’s a question at least worth exploring.

The training community almost universally places its emphasis on ‘winning a gunfight.’ However, as my colleague Tamara Keel put it, “most Level 101 defensive handgun courses, which is about all that anything but 1% of shooters are going to experience, cover a lot of the wrong skills, and do nothing to teach the skills to prevent negative outcomes.”

The best gunfight is the one you’re not in.

To that, I would add “as is the one where you don’t end up in handcuffs or a state of emotional regret for the rest of your life.” ‘Training Scars’ are a periodic topic of conversation in the training community. I’m not sure the Four Count drawstroke doesn’t fall into that category, although I’m open to further discussion about it.

If you would like to purchase Concealed Carry Skills and Drills, the link to the downloadable ebook is here. http://concealedcarryskillsanddrills.com