I shouldn’t have gotten in trouble for it but I did get in trouble.

I had to make a visit to my cardiologist last week. We had an enlightening conversation about the gun story of his childhood. He comes from a country where there is no gun culture to speak of but double barrel shotguns are sometimes found in rural homes. As a young boy, he visited his uncle’s country house. There, unsecured in a mud room, he found the uncle’s shotgun. Being an intelligent and inquisitive young child, he picked up the shotgun and brought it into the house. The gun was loaded. Fortunately, a family member came from behind him and took the gun away from him before any harm resulted. Then, he got in trouble. Although incidents where a child causes an unintentional discharge tend to be well publicized, the ones where a small child gets hold of a gun but doesn’t fire almost never do. I’m willing to bet there are many many more incidents where the gun doesn’t go off, fortunately.

What probably happens in those cases is the same thing that happened to him; the child ‘gets in trouble’ and is either scolded and/or punished. In our times of constant media bombardment that guns are bad, per se, having an Early Childhood Trauma https://www.nctsn.org/what-is-child-trauma/trauma-types/early-childhood-trauma involving a firearm is likely to prime the platform for that child to dislike and fear firearms. I would call that a long term Negative Outcome for our Second Amendment right.

END_OF_DOCUMENT_TOKEN_TO_BE_REPLACED

I just returned home after a two week Odyssey to and from the 2019 SHOT Show. My approach to the Show this year was completely different from previous years. After two weeks on the road and the Show, I have 21 pages of notes with many more yet to be written. The chronicles of my journey will be the subject of quite a few blog posts over the next two weeks.

My Odyssey had three phases.

Phase 1 – The drive there

A friend wanted to make it into a road trip to see part of America, so he rented a large comfortable SUV for the trip. We spent seven days on the road driving from Atlanta, through the South and Southwest parts of the USA, to Las Vegas. It was quite an interesting journey. To put things in perspective, it was a longer distance than from the Nazi submarine pens at La Rochelle on the coast of France to Moscow.

Phase 2 – The SHOT Show itself

This year I was on a ‘jihad’, as my colleague Tamara Keel calls my occasional bursts of enthusiasm, at the Show. The jihad was about storage solutions for firearms because I am tired of collecting articles about children shooting themselves with nearby adults’ guns. While we often think as security solutions to ward off theft, my focus was more about preventing unauthorized access. Although the topics are akin, they aren’t the same and I wanted to address the latter. A chance hallway encounter with my colleague John Holschen yielded this gem.

Don’t buy a gun until you have a way to secure it, even if it’s just metal toolbox and padlock.

Another thing I wanted to do was to interview people who aren’t ‘equipment obsessed’ about their experiences with firearms. Many of them come from Gun Culture 2.0, as Professor David Yamane calls it. The process of interviewing, rather than informing, was tremendously enlightening and useful to me. It was perhaps the most useful part of the journey, overall. Several of the conversations highlighted how important and useful some form of distance learning, such as my ebooks, is to many shooters who have very valid reasons for not attending training. Links to my books are at the bottom of the page.

It’s easy to get into the habit of always being comfortable when traveling. However, ‘the worst possible case’ doesn’t always involve having a deadly encounter with TODD or a band of ninjas armed with automatic weapons descending from the ceiling. For example, my friend was in one of the Baltic countries when Eyjafjallajökull volcano in Iceland erupted in 2010.  His adventures getting back to his home in Western Europe were not unlike a grand Escape and Evasion exercise covering thousands of miles.

We often talk about ‘Bug Out Bags,’ but what if you’re faced with having to get home while living on your wits? Another of my friends was caught on the other side of the US when air travel was grounded by the 9/11 attacks, so this isn’t something that only happens to Special Forces soldiers in Denied Areas. I thought a little practice might be in order so I seized the opportunity.

One of our stops was Vicksburg National Military Park. It is the site of one of the pivotal campaigns of the Civil War or War of Northern Aggression, depending on one’s preferred terminology. The underlying reasons for the four year conflict are still being debated but the motivation displayed by the participants committed to their causes remains amazing to this day.

We also made a visit to the site of the Duel at the Dumbster in Abilene so I could get a first hand feel for the terrain of the shooting. Someone asked me at the Show if there were lessons to be learned from the incident. My immediate reply was “About foolishness and stupidity, a great deal.”

There were many interesting devices for securing firearms available at the Show, some new, some old. There was not much activity the several times I visited the Project ChildSafe booth, which I found disheartening. The folks at the booth were very friendly and had a lot of information. Similarly, there wasn’t much activity around the areas that displayed securing devices. Not many people seemed interested in preventing kids from shooting themselves in the face with an adult’s gun. I has a sad because of this. ☹

It was a long and sometimes arduous journey home. My friend bought me a nice dinner of Linguine alle Vongole before my departure for which I am very grateful. Finding decent food during the trip wasn’t easy and I was glad I had eaten a good meal before leaving. As a thought reconnaissance in preparation for a lengthy and difficult return trip home, it was very useful and I learned a great deal. 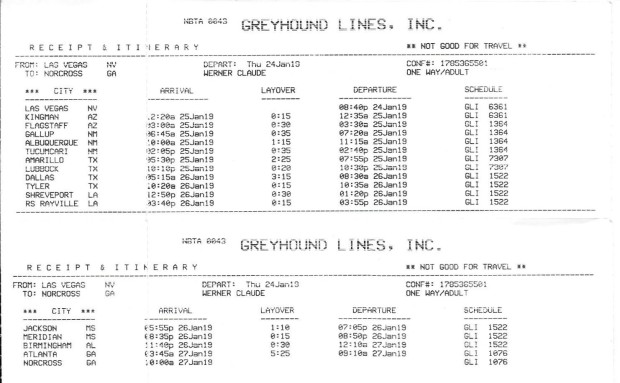 For those interested in improving your skills with a handgun, I have written two books.

For those who wish to avoid Serious Mistakes and subsequent Negative Outcomes, I have made a downloadable recording.