The maximum effective range of an excuse is zero meters.

While comparing notes from our experiences at Paul-E-Palooza 2, a friend of mine noted how many excuses for poor hits he heard during the live fire block he attended. “I haven’t gotten used to the sights on my gun.” “The offset I have to use at this distance is throwing me off.” “When I shoot pistol in 3 Gun, I smoke it, but I can’t seem to hit these little targets.” Etc., etc., etc. Those are all ego defenses shooters use to avoid saying “When put to the test, it’s clear I’m not as proficient as I like to think I am.”

Let’s compare that with the Facebook commentary of a very smart and honest lady I coached a little during the same block.

After this class I had a live fire with Dr. [Sherman] House. He did dot drills and eye targets. We shot at 3 and 5 yards at these tiny targets. Fact from Dr. House, under stress your shot pattern will double in size. [So,] We might as well practice on targets 1 ¾ inches big. Out of the 30 shooters, I suck because I anticipated recoil. [Obviously, from my point of view, she was far from being the only one whose performance could stand some improvement.] I got a private lesson by “THE PROFESSOR Claude Werner”. … Professor Werner taught me to focus on a slow trigger press. [Actually, I was trying to emphasize a smooth trigger press] When Doc Werner pressed my trigger while I had the sights aligned[,] I hit the target dead center. I know what to work on. I need to dry fire weekly. 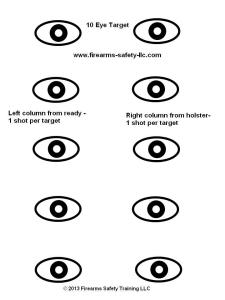 At times, we all suck, on a relative basis. The way to get past it is to figure how to “shoot better,” as Bill Rogers puts it. Then accept that we need to do some work on our weakness and get to it without using a lame excuse as an ego defense.

A little coaching can help determine what the problem is. In the above lady’s case, she was very good at using her sights; when I pressed the trigger for her, the round struck exactly where it was supposed to. She just needs to work on her trigger manipulation. She self-identified the problem and the solution. I have no doubt she will work on it vigorously.

Many shooters spend a lot of time, money, and effort refining and changing their equipment in an attempt to improve their performance. It was interesting that even at a training conference like Paul-E-Palooza, during the charity auction, ‘cool’ equipment items sold at a premium to retail while training items sold at a discount to retail. My observation is that the solution usually resides inside the shooter rather than in a hardware solution. As one of my colleagues puts it: “I have a friend who will kill you with a Lorcin and there’s nothing you’ll be able to do about it.”