By tacticalprofessor on March 3, 2015

I emphasized very strongly about the need for keeping a flashlight next to your ‘nightstand gun’ during my Negative Outcomes presentation at the Rangemaster  2015 Tactical Conference. Although I practice dryfire with a flashlight regularly, it occurred to me that I don’t have a structured regimen for doing so. Tonight, I thought I would work on that a bit.

At first, I started doing my 12 shot drill on my dryfire range with the flashlight. I used the left column to practice with the Harries technique as my ‘outside’ technique. For a general search and ‘inside’ technique, I used the right side column. I just did it this way due to habit because that’s similar to the way I shoot the drill livefire.

By ‘outside,’ I mean the flashlight is outside both my body and the pistol. ‘Inside’ means the flashlight is inside of the gun and toward my body. It’s necessary to have both an inside and outside technique so that you can use the light on either side of a piece of cover or concealment. For a right hander, the outside technique is used when using the light around the right side of cover and the inside technique is used around the left side. Left handers reverse that.

It occurred to me that I could use the same setup I use for the Air Marshal Tactical Pistol Course. I’ve modified that target setup slightly so I get more traverse on the multiple target strings. My setup also allows me to use both inside and outside techniques because of the arrangement of my apartment. 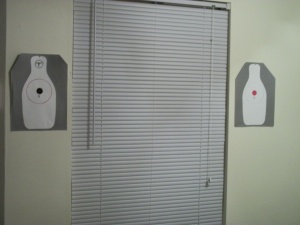 I started the Harries practice with the light pointing toward the target but the pistol down at low ready. Even when we’re identifying a target, we don’t want to muzzle them until the shoot decision is made. Then I practiced bringing the pistol up on target while keeping the light pointed at the target. At first, I did this in the hallway, just to get my mechanical movement correct.

For the cheek practice, once again, I started with the light pointing toward the target but the pistol down at low ready. Since I use the cheek technique as a general search technique, this means I’m going to be shooting one handed, if the shoot decision is made. I like the cheek technique as a general search technique because it allows me to use the light as an impact tool, if necessary. Because there is a possibility during a general search, I would be in a hallway when shooting started, I incorporated turning off the light after the shot and taking a sidestep. But, there’s not much maneuver room in a hallway, so don’t think this is some magic potion that prevents getting shot.

Once I was satisfied I had the mechanicals down pat, I moved to positions of cover, both left side and right side. I practiced on both sides, making sure I didn’t splash the light off the wall and into my face.

Note that in the photographs I took, I was using a flash or the regular lighting for clarity. When practicing, the place was completely dark. Also note that the camera wasn’t positioned exactly where the target was, so I look more exposed than I actually was.

I’m glad I developed this as a more formal program. I’ll be doing it at least once a week from now on as part of my 1000 days of dryfire.