By tacticalprofessor on February 13, 2018

Thirty-five years ago today, on February 13, 1983, a violent gunbattle took place in Medina, North Dakota. Although less well known than the Miami Massacre in 1986, it was every bit as bloody and violent. Something it had in common with the Miami Massacre was preparation for conflict and the decisiveness of long guns at pistol ranges.

On one side was a task force of US Marshals and local law enforcement officers. On the other side were members of a local Posse Comitatus group. Casualties were high on both sides. Four months later, a second related encounter, hundreds of miles away, brought more loss of life.

Gordon Kahl was a Midwestern farmer and Federal tax resister. He was a member of a loosely knit organization called the Posse Comitatus. The Posse recognizes no authority above the county level and held many hateful beliefs. He had been imprisoned for Federal tax evasion but had been released on probation. However, he failed to report to his Probation Officer and a Federal warrant for his arrest was issued.

The US Marshal’s Office in North Dakota determined to take him into custody as a result of information received that Kahl was attending a meeting in Medina. The Marshal, Ken Muir, and three Deputies; Carl Wigglesworth, James Hopson Jr., and Robert Cheshire drove to Medina to make the arrest. There, they were joined by a Stutsman County Deputy Sheriff, Bradley Kapp, and a Medina Police Officer, Steve Schnabel.

On request of the Medina police Chief, the determination was made to conduct the arrest just outside of town. This was because Kahl was known to always carry a Mini-14 rifle, except when he went to the grocery store with his wife. The Chief did not wish to have violence within the town itself that would endanger the townspeople.

A roadblock was set up on the route out of town by Marshal Muir, Deputy Wigglesworth, and Officer Schnabel. The remaining Deputies stayed in town to follow Kahl once he left the meeting. Deputy Kapp joined Deputy Marshals Cheshire and Hopson in the Ramcharger.

Accompanying Kahl to the meeting were his wife, Joan, his son, Yorie Kahl, his friends, Scott Faul, Vernon Wagner, and Dave Broer. Several of the males in the Kahl party were armed with rifles. Joan was not armed.

When the meeting finished, the Kahl party departed town in two vehicles, unknowingly headed toward the roadblock. The stage was set for a bloody shootout.

Kahl closed on Cheshire and Kapp’s vehicle. Kapp, being wounded and unable to operate his weapons, retreated. Cheshire lay severely injured and unable to move. Kahl then executed him by shooting him twice in the head at close range.

Commandeering Schnabel’s police vehicle and stealing his weapon at gunpoint, Kahl then loaded Yorie into the vehicle and drove him to the nearby clinic, along with Scott Faul. Kahl and Faul then escaped. 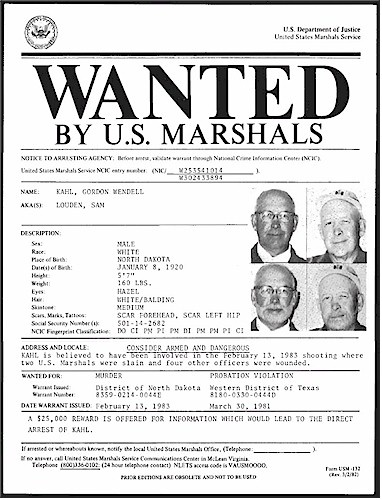 In the aftermath of the shootout, Muir and Cheshire would lie dead. Hopson, Kapp, Schnabel, and Yorie Kahl would be seriously wounded. 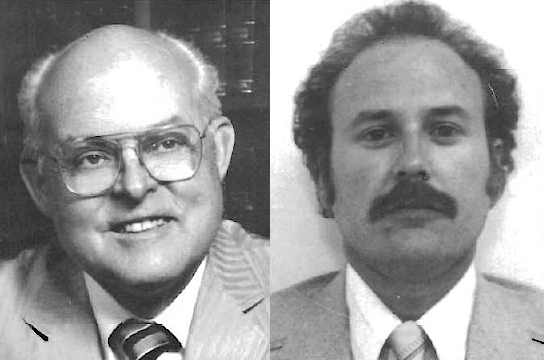 Scott Faul eventually surrendered. Gordon Kahl was killed, along with Lawrence County (Arkansas) Sheriff Gene Matthews, the following June. A nationwide manhunt had tracked him to Arkansas where a confrontation with local and Federal law enforcement officers took place. Yorie Kahl and Scott Faul were convicted of murder and sentenced to life imprisonment.

The Marshals Service memorial to Muir and Cheshire can be found here.

In 2003, Public Broadcasting made a documentary about the incident.

The documentary shows the various grey aspects of the incident. The memories, attitudes, and after-effects of the survivors are worth listening to.