I like inexpensive pistols. Not everyone can afford ‘mid-priced’ ($500-700) pistols, so I like to give those folks some options. Over a year ago, I picked up a S&W SD9VE on sale for about $300. It proved serviceable and reliable but the trigger was a little heavy. It wasn’t unmanageable but it was hard to shoot to the level I like to with it. The three dot sights had to go, so I blacked out the rear dots with a black marker and painted the front sight orange.

Shortly afterward, Apex Tactical Specialties was selling their upgrade kit at the NRA Annual Meeting for half price, so I bought it. It consists of several replacement springs and an ‘Action Enhancement Trigger.’ I didn’t care much for the hinged trigger on the gun, so I bought the kit. After installing just the spring kit, the trigger pull became noticeably easier to use. It lightened up enough that I didn’t even install the trigger. 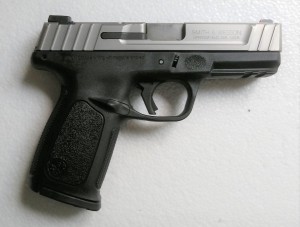 Yesterday, I decided to install the trigger also. It is a Glock® style trigger with a safety bar that also reduces the length of travel and pull weight. Contrary to what the common taters on the Apex YouTube installation videos said, it was easy to install and didn’t mess up my gun. Some people have no mechanical aptitude and simply should not work on mechanical devices more complicated than a ball point pen, much less firearms kept for personal protection.

Another interesting factoid I discovered was that the SD9VE is actually the Glock 19 sized pistol that people have been clamoring for S&W to make for as long as I can remember. When I put the two pistols side by side, it was obvious they were in the same size class. 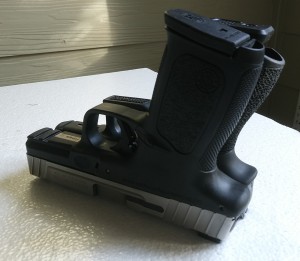 To test out what I could do with it, today I shot the IDPA 5×5 Classifier. The Classifier is a simple yet challenging test of equipment and shooter. It is only 25 rounds, requires only one target, and can be set up and shot in less than five minutes. It’s a little difficult for newer shooters, so I didn’t include it in Concealed Carry Skills and Drills.

I was able to shoot an overall score of 23.37 (3 points down), which put me squarely in the middle of Expert classification. Considering how little centerfire ammunition I’ve shot in the past few months, I think that gives a good indication of the pistol’s potential. 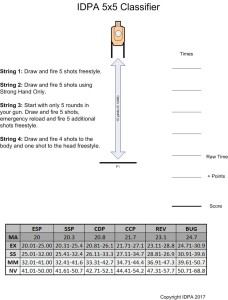 My gun has fired close to 1,000 rounds without a malfunction, so it has proven to be very reliable. Overall, this is a very underrated pistol. I’m looking forward to putting more rounds through it.

Note that I bought the pistol and the upgrade kit with my own money. I get no promotional consideration for writing about it, I just like the gun.