Last night, I had an interesting conversation with John Daub of KR Training about the new NRA CCW Course. KR Training is one of, if not the, premier provider of firearms training in Texas, so his thoughts about the CCW Instructor Course he and Karl recently completed were something I wanted to hear. One of the most interesting items of the conversation was that the NRA has adopted a 100 percent hit standard for the NRA’s Qualification Course, if instructors choose to use the NRA’s Qual Course.

I’ve been a big believer in 100 percent standards for a long time. The importance of an exacting standard was emphasized by a recent Incident where a woman in Oroville, California shot and paralyzed her husband as a result of taking a Hostage Rescue shot on a home invader. Although she killed the home invader when she “emptied the clip” at him, her husband is now paralyzed for life. That incident reminded me of how imprecisely we use the term Worst Possible Case.

It’s very important for us to understand our capabilities. The CAN, MAY, SHOULD, MUST paradigm developed by Steve Harris, Esq. puts CAN first for a reason. CAN, what are you able to accomplish at that moment?, has two components – Mental and physical. The Oroville woman had the mental part of CAN but not the physical. Let’s compare and contrast her incident with that of Meghan Brown, who also shot and killed a home invader during a struggle.  Ms. Brown had been to the range with her pink Taurus revolver and knew she was not a very good shot. As a result her strategy was to close with the struggle and take the shot at a point where she was sure she could make her hits.

The ‘Downrange problem,’ in which an innocent person is downrange of the shooter, is far more common than we think. Those who keep a firearm for Personal Protection need to keep in mind that the situation may not be ‘self-defense’ but rather protecting another person.

How to put this into practice becomes the question. The Decisional Exercise Family taken hostage from Concealed Carry Skills and Drills is one example. Simply use two sheets of paper as the hostage. Put them on the same side as your Support Hand so you maximize your opportunity to hit them if you jerk the trigger. If you hit those two sheets of paper, assume you seriously wounded or killed a member of your family. 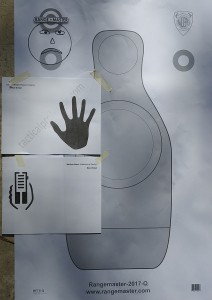 To add some realism, you can put a facial photo of a family member above the printed sheets or just draw a face above them. Here’s a Non-threat PDF Printable Non threat Silhouette torso that is included in Advanced Pistol Practice and Shooting Your Black Rifle. When practicing on an indoor range, you probably won’t be able to set up the full scenario but you can still do the individual strings.

What’s the Worst Possible Case? It’s a situationally dependent individual decision. Using a little forethought and doing some practice may help you solve it without a Negative Outcome. Going to the range and figuring what distance YOU can make 100 percent hits will give you a very important piece of information in the context of Personal Protection.

“It’s a downrange world, better get used to it.”

In this instance, several officers utilized lethal force in order to defend themselves, their fellow officers and bystanders in a vehicle stopped on the side of the freeway from the perceived imminent threat posed by the Subject. While engaging the Subject in order to stop his actions, the two bystanders inside the vehicle were in the foreground.

Any time an officer (or officers) utilizes lethal force, and the [Board Of Police Commissioners] learns that bystanders were in the foreground, the BOPC takes into consideration the totality of the circumstances, including their articulation of the threat and the psychological effects which occur during high stress situations. Here, there were several officers who not only knew the bystanders were in the foreground, but articulated firing in defense of them. For instance, one of the reasons that Officer E fired was due to the Subject approaching Witness A’s vehicle and there being two people observed inside.

Most people don’t often consider the possibility that innocent persons, perhaps family members, will be downrange during a criminal confrontation. I call this “The Myth of the Lone Gunman.” However, it is a fairly common occurrence. Why? Simply because your family members are with you much of the time. This month’s Armed Citizen column relates several such incidents.

The angle of attack chosen by a criminal predator is unlikely to have anything to do with where your family members are in relation to you at the time. What if a family member, and not you, is the victim of the assault? In that case, you are almost guaranteed to have a family member downrange.

Any armed confrontation is going to be a difficult situation. Throw in the stress of having a loved one or innocent bystander downrange and it’s going to get a lot worse.

Something that very few people consider is the human dynamics of a violent home invasion. In such an incident, it’s very common for the male of the house to become involved in a physical struggle with the invaders. The lady of the house then becomes the one having to do the shooting. Meghan Brown’s incident is a good example of how this often plays out.

In that kind of situation, having little or no marksmanship ability could become a problem. The ability to make a good decision about shooting will be essential to a positive outcome. When talking about Decisional Shooting, the discussion almost always revolves around the legal factors such as Ability, Opportunity, and Jeopardy. However, other key components, just as important, will be:

Using a shotgun, either long gun or pistol, can greatly complicate that question of weapon capability. There are ways of mitigating the risk with a shoulder fired shotgun but not eliminating it. Except for a contact shot, handheld shotguns, such as ‘The Judge,’ become almost useless when a non-threat is downrange.

The perforation issue has to be considered. In at least one case in Texas, a woman killed her husband, while trying to save him, because of perforation and poor marksmanship. That’s not the outcome she was looking for, I’m sure.

Having the emotional wherewithal is not something that can be taken for granted. I know of students who demonstrated they were perfectly capable of performing the task at the range. When a picture of a friendly face was put on the hostage, they refused to shoot. That’s an issue.

I have watched over 100 iterations of a Force on Force scenario where the defender was deliberately presented with a clear shot on a hostage taker at a range of 10 feet. The hostage was adjacent, at arm’s length, not in front of the attacker. The number of students who chose to take the shot without closing to contact distance could be counted on the fingers of one hand. As Ken Hackathorn says: “You are unlikely to do anything under stress that you are not subconsciously sure you can do well.”

It would probably be wise to practice the obstructed downrange shot regularly. I devised a drill specifically for this. 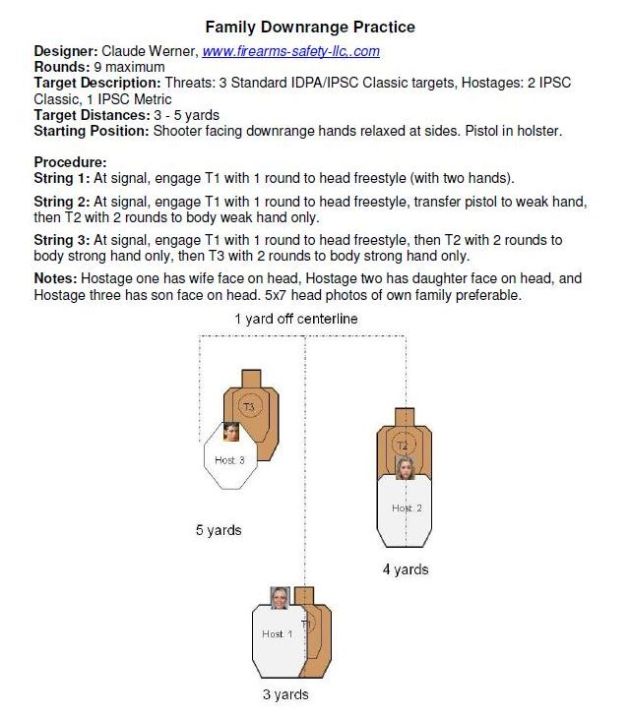 Even at an indoor range, there are usually hostage targets available. The way to use them is to practice taking one shot at a time, though. Do it for a full magazine, starting each single shot from a ready position. Keep the range short, less than 4 yards, that’s the decision point in terms of proxemics.

Don’t wait to take your practice until the real thing happens. On the Job Training isn’t a ‘best practice’ for this scenario.