The Origin and Evolution of Dot Torture

Dot Torture is a well known practice regimen among skilled shooters. Its origins and evolution are less well known, however. 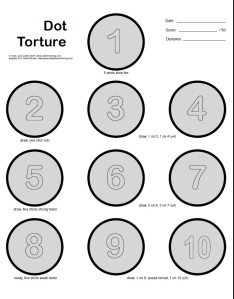 Shooting on dot targets, i.e., small filled in circles from 1.25 to 5.54 inches in diameter, as a speed shooting training and practice exercise, was originated by John Shaw, a World Champion shooter, in the early 1980s. In his book, You Can’t Miss: The Guide to Combat Pistol Shooting, he explains the training standard he established for his students. Until they could consistently hit the black bullseye (5.54 inches) of an NRA B-8 bullseye target from the holster in two seconds at seven yards, he didn’t allow them to move on to more advanced drills. 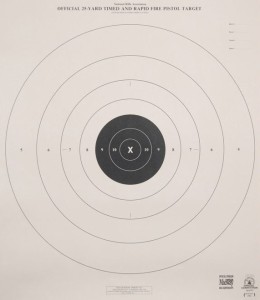 Shaw’s school, the Mid-South Institute of Self-Defense Shooting evolved the concept of dot shooting to a high level. Combined with shooting at steel targets, as originated by Bill Rogers, founder of the elite Rogers Shooting School, dot shooting became a standard component used in the practice regimens of knowledgeable shooters who aspired to a higher level of competency.

The concept of dot shooting was so effective at teaching shooters to hit the target, it quickly became part of military counter-terrorist pistol training. The US Army Special Forces developed a course called ‘Special Operations Training’ [SOT] during the 1980s to train its personnel to use the 1911 pistol at a level not seen before that time in the military.