By tacticalprofessor on September 14, 2018

The most important Fundamental of all is to be sure your gun works. A recently purchased used revolver seemed okay in most aspects except the cylinder lockup had a hitch. Upon actually shooting it, it worked fine for the first 10 rounds. After that, the trigger could not be pulled with the cylinder closed. As I suspected, something was wrong with the center pin spring and the center pin would not push the bolt into position when the cylinder closed. Moving the bolt into position before it will fire is fundamental to double action revolver design.

Upon examining it later, there was no center pin spring, hence the issue. Someone had obviously messed with it because the extractor rod came free quite easily. Fortunately, the sear/bolt spring for a S&W fit adequately and fixed the problem.

As my colleague, the late Paul Gomez, was fond of saying, “Shoot Yor ….. Guns.”

After repairing it, I used it for another form of progression in practice, increasing distance incrementally. Starting out at a close distance, marking your target after each string, and then increasing the distance gives you an indication of where your strengths and weakness lie. Knowing them gives you an idea of what to practice next.

The practice regimen I chose was the Florida Evaluation Course from Concealed Carry Skills and Drills. It is a 40 round Par Time Course of Fire that starts at 3 yards, then 7 yards, and finally finishes at 15 yards. The Course is based on the Law Enforcement Qualification Course for the State of Florida. There it is shot on the B-21 target. For my purposes, I used my Printable Silhouette. The Course consists of short strings and will work for either autoloaders or revolvers.

I mark the target at each distance. Doing so gives me a good indicator of how I’m shooting each time. This process is similar to scoring each shot in Comparative Standards but is simply done in reverse.

Another item occurred to me to test when I had finished. With double action revolvers, the desire to retain a single action capability is often expressed. This is usually stated in the context of being able to make head shots on terrorists at some distance. I wanted to see how much value that had so I reshot the 15 yard Stage doing headshots only. The first time I shot them double action. Then I shot it again, thumbcocking the revolver for each shot. 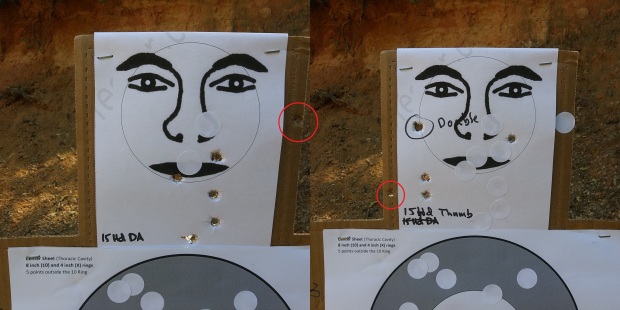 For me at least, the extra time to thumbcock each shot isn’t worth it. See the sights, press the trigger smoothly, get the hits.

Notes about the Taurus 82. This one is an older pre-lock example. The trigger pull is perfectly serviceable with no grittiness or stacking at all. The sights are better than a S&W and it shoots to them. K frame speedloaders fit perfectly. I removed the lanyard loop it came with because I don’t think I will need that.

If you would like to purchase Concealed Carry Skills and Drills, the link to the downloadable ebook is here. http://concealedcarryskillsanddrills.com

For those who don’t carry a concealed firearm but keep a handgun for home defense, Indoor Range Practice Sessions is the appropriate ebook for you. The link to the downloadable eBook is here. http://indoorrangepracticesessions.com

FTC notice: I purchased all the equipment used in this test and receive no promotional consider for anything I say about it.